Daniel Jilg starts off with a picture of a celestial body (=sun, planets) movements with a geocentric worldview. When you put the earth in the center, the movements of the planets are hard to map.

When you put the sun in the center, the movements make more sense. Circular movements or, as Keppler improved, elliptical movements.

Newton improved on it with his law of gravity. Now the movements can be calculated. You can even look at the current planets’ movements and look at the small incongruences. Would an extra planet, a long way off, fix those incongruences? Calculate it and start pointing your telescope. They’re apparently in the pointing-your-telescope phase for some “planet nine” now.

Once the number of celestial bodies gets higher, the calculus gets harder and takes longer. You can express that with the “big O notation”. O: Order of magnitude.

There’s an algorithm that can do better. n log(n), which is much less worse than n^2. The algorithm places the bodies in a “tree”. Bodies that are farther away can be grouped together with an average location and mass. You now have a much reduced number of calculations.

He showed this Barnes-Hut algorithm visually. “Quad trees”: splitting up the area in quarters until there’s only one celestial body left in a subarea.

(Very good visual presentation/explanation, but impossible to write down :-) ) 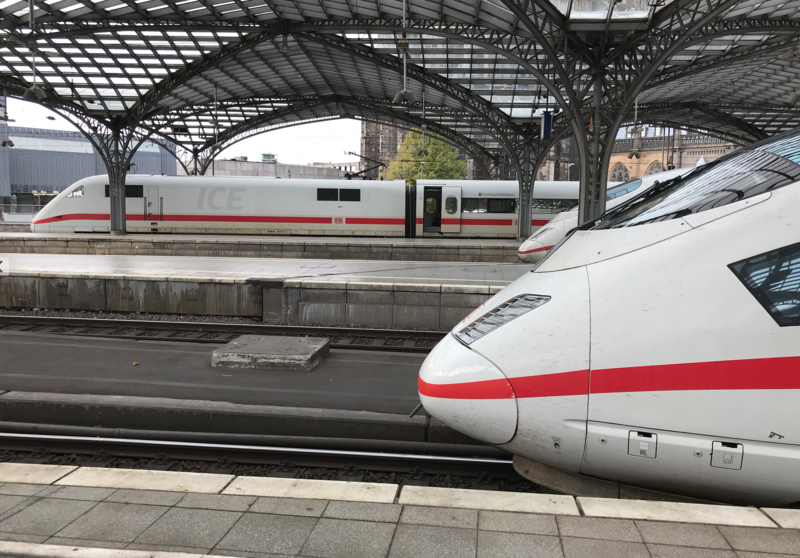 Photo explanation: simply a picture from my train trip (with a nice planned detour through the Eifel) from Utrecht (NL) to Karlsruhe (DE). Three ICE train heads in Köln Hauptbahnhof.