Susanne Mertens is a physics professor in Munich. Neutrinos? Karlsruhe? What is the link? There is the KATRIN experiment with the ‘KA’ of Karlsruhe. An experiment looking more at neutrons.

Computing and programming tools essential for scientific experiments. She’ll tell about the physics background and end up with python.

She showed some mind-boggling numbers. Huge number of galaxies. Galaxies made of huge numbers of stars. One of them being our sun. Our planet then has 7 billion people. Everyone exists out of a huge number of atoms. Multiply those numbers…

But. All those atoms? 4% of the mass of the universe. The other 96%? Dark energy, dark matter. But what is it?

There’s lots of research into neutrinos. When you measure radioactive decay, you’d expect to measure a fixed amount of energy. But that’s not the case. Someone postulated that maybe another unknown particle might be created: a neutrino.

There are a lot of neutrinos. But: they hardly interact with regular matter. Enormeous numbers pass right through your body every second. So detecting and measuring them is a problem. It took 30 years to design an experiment to actually detect one.

What we now know is that neutrinos have mass. So that 96% unknown mass? Part of it might be neutrinos. Only we don’t know how much that mass is. So… experiment time.

That is the KATRIN experiment. A Tritium (highly radioactive) experiment. Building it took 10 years (including a huge detour). Only the fastest electrons are measured. Sounds simple, but it is very hard.

One of the problems was calculating how to extract those fast electrons: the magnetic fields had to be calculated. They needed a supercomputer for that.

The experiment will start for real in 2018 and it will take three years to take the necessary measurements.

In the mean time…. there is talk about a fourth kind of neutrino. “Only” for that you need measurements of the entire spectrum instead of only the tip of the iceberg the KATRIN experiment is looking for. She showed some data from an experimental small version.

The data analysis from this experiment is handled with python. Numpy, scipy, matplotlib. The current students love doing everything in python. No more c++ and fortran if possible. Jupyter notebooks are used a lot.

But: for large-scale analysis parallel python will be important.

She has an idea: there are probably quite some python programmers that originally come from a physics background. She’s thinking about a meetup, workshop or something like that. You can contact her at smertens@mpp.mpg.de 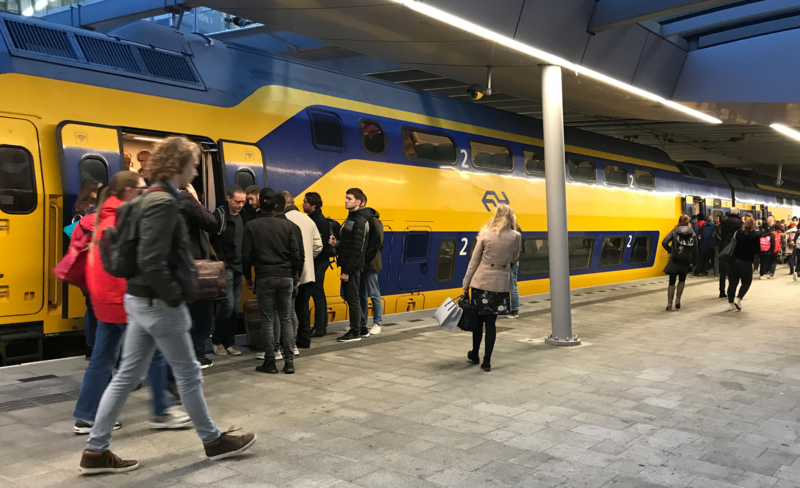 Photo explanation: simply a picture from my train trip (with a nice planned detour through the Eifel) from Utrecht (NL) to Karlsruhe (DE). Dutch double decker intercity train.